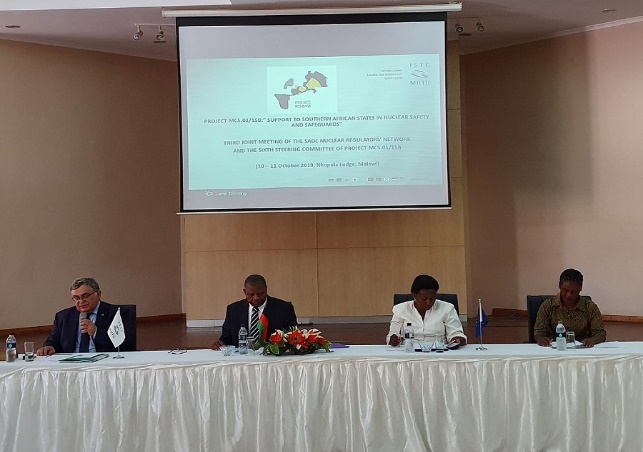 The third meeting of SADC’s nuclear regulators’ network kicked off in Malawi with representatives of national regulatory institutions and respective line ministries from Angola, Botswana, Eswatini, DRC, Lesotho, Madagascar, Mozambique, Tanzania, Zambia, Zimbabwe, and Comoros hosted by the Atomic Energy Regulatory Authority (AERA) of Malawi. The meeting is convened jointly with the Sixth Steering Committee of project MC5.01/15B “Support to Southern African States in Nuclear Safety and Safeguards”. Mr. Oliver Kumbambe, Chief Director, Environment and Climate Change Management, Ministry for Natural Resources, Energy and Mining and Ms. Catherine Zamalile, Assistant Director, Political Affairs Department, Ministry of Foreign Affairs and International Cooperation greeted the forty participants and underlined that the government of Malawi considers the engagement with the project as extremely beneficial, because it helps the country prepare its legal framework and align its policies with the international standards in nuclear safety and safeguards. They both emphasized the significance of regional cooperation among Southern African countries-members of SADC and encouraged further joint activities within and beyond the scope of the project. Kamen Velichkov, ISTC’ SPM and DA, thanked the public institutions and experts in Malawi for their commitment to actively participate in the implementation of the project and praised the team of the AERA led by the acting director Ms. Victoria Kachimera. As a Uranium mining and exporting country, Malawi is doing its part in the joint efforts to engage various stakeholders in “demystifying the nuclear”.

The main goal of the joint meeting in Malawi is to take stock of the activities of project MC5.01/15B and to discuss the best and most efficient ways to expand its activities in 2020 by involving SADC member states. The keynote speech was delivered by Dr. David Otwoma, Chairman of the Eastern Africa Association for Radiation Protection (EAARP) who focused on the puzzle of the nuclear safety and safeguards legal framework. By providing examples from various countries and contexts, he discussed how the international standards could help African countries strengthen their regulatory regimes and highlighted the need to learn from the best practices from Uranium producing countries and countries operating nuclear power plants. Dr. Otwoma traced the importance, results and outcomes for Africa of the Pelinbada Treaty and the last 10 years since it came into force.

Representatives of Software Company Ltd., which is contracted to develop the web-based Information Tracking system under project MC5.01/15B, reported on the state of their work with project countries. The ITS is the tool that helps track radioactive materials along their way from an initial to a final point of destination and allows joint tracking and monitoring across borders and customs. The delivery and installation of the ITS’s equipment in four project participating and partner countries is completed and initial training for radiation protection officers and specialized staff from national nuclear regulators was successfully executed in Arusha, Tanzania in April 2019. The Software company stands ready to elaborate with participating countries several options for further enlargement of the scope and purpose of the ITS.

Representatives of project and partner countries shared information and lessons from activities that took place since the last meeting of the Steering committee and the SADC Nuclear regulators’ network in Tanzania in April 2019. Among these activities and events are: the study visit to Finish nuclear institutions in June 2019; the national training in nuclear safety, security and safeguards in the transportation of Uranium Ore and other radioactive materials that took place in Lusaka in July 2019; as well as the side event entitled Stronger Nuclear Security through Effective Cooperation: EU support through Centers of Excellence in East and Central Africa during the IAEA 63rd General Conference in Vienna, in September 2019.

The joint meeting is also reviewing the elaboration of national reports that are capturing the current state of affairs in the project countries with regard to their legal and policy provisions, institutional frameworks and coordination processes that address the Uranium mining, milling, processing, transportation and export regimes. The findings by the authors of the national reports are discussed by the representatives of the responsible public institutions for further fine-tuning and editing.

The second day of the meeting is dedicated to a joint planning of the next steps that the project participating and partner countries, and the SADC member states will be taking in 2020, including an awareness rising meeting with the SADC Secretariat in Gaborone, Botswana, expansion of the Information Tracking System, preparation of multi-country tabletop and field exercise, on demand and tailored trainings and finalization of the national reports.