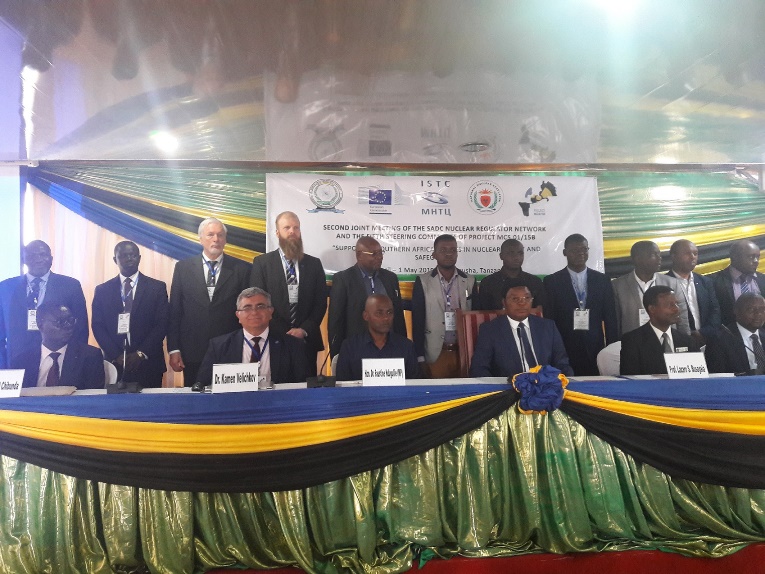 The Prime Minister of Tanzania Hon. Kassim Majaliwa officially inaugurated the Second Joint Meeting of SADC’s Nuclear Regulators Network and the fifth Steering Committee of the Project “Support to Southern African States in Nuclear Safety and Safeguards” (Project MC 5.01/15 B). Mr. Majaliwa greeted the 40 plus participants coming from 16 countries and international organizations from Africa, Europe and Central Asia, who gathered at the city of Arusha, headquarters of the Tanzanian Atomic Energy Commission (TAEC). The Prime Minister thanked ISTC for choosing the United Republic of Tanzania to host “this special event.” “Similarly, I wish to extend my deep appreciation to the EU for the continuous support in ensuring that the nuclear safety, security and safeguards in the region are reinforced”, the prime minister stressed. He also recalled: “the transportation of nuclear and other radioactive material is a global concern and not a one-country issue. It is therefore important for the SADC region to have harmonized guidelines for nuclear material safety and security.” The prime minister  emphasized that as a country with large deposits of Uranium, Tanzania understands the need to strengthen the nuclear safety and security regulatory framework with a view to ensure that the people, the environment and the ecosystem in general are protected from any harm that may result from mining, milling, processing and transportation of Uranium. He therefore claimed that all the topics that the meeting will discuss are relevant and well aligned to Tanzania’s national strategy to embrace the contribution of science, technology and innovation in socio-economic development.

On behalf of ISTC, Dr. Kamen Velichkov made introductory remarks about the progress in the implementation of project MC 5.01/15 B and praised the contribution that TAEC is being making in strengthening the collaboration among African states in nuclear safety, security and safeguards. The Regional Governor of Arusha Mr. Mrisho Gambo, the Deputy Minister of Health, Community Development, Gender, Elderly and Children Dr. Faustine Ndugulile and the Director General of TAEC Dr. Lazaro Busagala welcomed the participants of the joint meeting of SADC Nuclear Regulators Network and the Steering Committee of Project MC 5.01/15 B. Members of Parliament, representatives of various ministries and national institutions attended the opening of the event.

Convened by the International Science and Technology Center and the Tanzanian Atomic Energy Commission, the meeting is taking place at an important moment of the implementation of Project MC 5.10/15B. One of the main components of the project – the design of a web-based communication system that monitors and tracks the transportation of radioactive materials within and across the borders of the project participating countries is ready for roll out. Tailored training and simulation exercise on how to use the system took place in Arusha just ahead of the meeting of the Steering Committee.

The initial drafts of four national case studies – on Malawi, Zambia, Tanzania and Namibia, and a regional report on the nuclear transportation safety regulations in Southern Africa are also part of the meeting’s agenda. The elaboration of these reports is in support of further harmonization of the existing national legal and institutional frameworks and policies that enhance the nuclear safety and safeguards according to the international obligations of each country.

For the first time the deliberations of the Steering Committee of Project MC 5.10/15 B are joined by representatives of AFCONE – the Africa Commission on Nuclear Energy. Its Executive Secretary, Dr. Messaoud Baaliouamer, presented the view from AFCONE on the state of nuclear safety and safeguards in Africa. He emphasized the need to identify responsible players all over Africa and expressed readiness to maintain contacts with the countries involved in project MC 5.01/15 B in order to exchange information and keep track on the achievements of each partner.